The band first formed i 2012 under the name The Heat with singer Even Berg, guitarists Kjetil F. Wevling and Erland Nyborg, bass player Stig Sætevik and drummer Knut S. S. Wettre. They released a 7" single called "Ruben's Lost Control" that Christmas before changing name to Razorbats the following spring.

In the summer of 2013 the band recorded their first EP under the new name. Turbojugend label Self Destruct Records in the US somehow heard the self-produced EP and wanted to release it worldwide. "Bring It On" was released in June 2014 and national radio in Norway quickly picked up on the song "Born in Blood". The band suddenly had a nice little radio hit on their hands and Razorbats had arrived!

Even before the "Bring It On" EP had been released the band started work on their debut album. This time recruiting producer Kai Christoffersen, who was known for his work with retro rockers Orango and for winning the Norwegian Grammy (Spellemann) for his work with Ila Auto. Before work began the band parted ways with guitarist Erland Nyborg and they continued as a four-piece for a while. "Camp Rock" was finally released in September 2015 and received fantastic reviews from all over the world as the reputation of the album  spread through the winter of 2015/16. Again national radio in Norway started playing the single titled "Kids of the 70s" in addition to rock radio in Europe and college radio in the US. To support the album Razorbats went on their first tour of Norway and also added dates in Sweden and the UK. "Camp Rock" was named album of the year by Glitter 2 Gutter in the US and featured on several best-of list for 2015 all over the world.

In the spring of 2016 the band again went in the studio with Christoffersen to record a couple of song, this time resulting in an EP titled "This High". It was released in the fall of 2016, but the band didn't tour to support it, but instead got ready to record the follow up to Camp Rock. This time things did not go as planned...

Right before Christmas 2016, with most of the album done, singer Even Berg said he was leaving the band for personal reasons. The remaining member couldn't agree on what to do next, so bassist Stig Sætevik left around the same time. With half a band and half an album, Razorbats was close to calling it quits. After a few weeks of soul searching drummer Knut S. S. Wettre and guitarist Kjetil F. Wevling decided to give it another go and try to find new band members.

Wevling remembered a band called Hollywood Vampires, that were stirring things up a few years ago. They had a fantastic singer and frontman in Paulie Vercouteren, so he tracked him down. As it turned out Paul was a fan of Razorbats, so they met up for a chat and a few beers. Paul brought along bassist Chris Haugerud, who was in a band called Kill City Bandits, that was about to pack it in. The new lineiup quickly started rehearsing and it was just magic! This was gonna work! The guys had decided already that first night that they were gonna ad a second guitar player to the lineup. Auditions were held and Asle Tangen, previously of Babylon Bastards and She Said Destroy, joined in May 2017. During the spring and summer of 2017 the new lineup finished the follow up album to "Camp Rock" and played their first gigs at Gjerstad Rock Festival and Raumarock in Norway.

In the fall of 2017 the band signed with Norwegian record laber Rob Mules Records and in February 2018 they released their sophomore album titled "Razorbats II". The singles "Social Rejects" and "Sister Siberia" had already been playlisted on several rock radio stations in Europa and college radio stations in the US. That spring the band once more hit the road for their biggest tour of Norway to date, including several festivals and the support slot for The Offspring in Oslo. 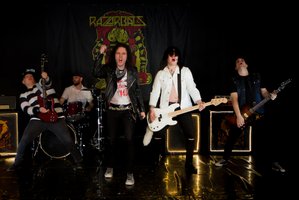